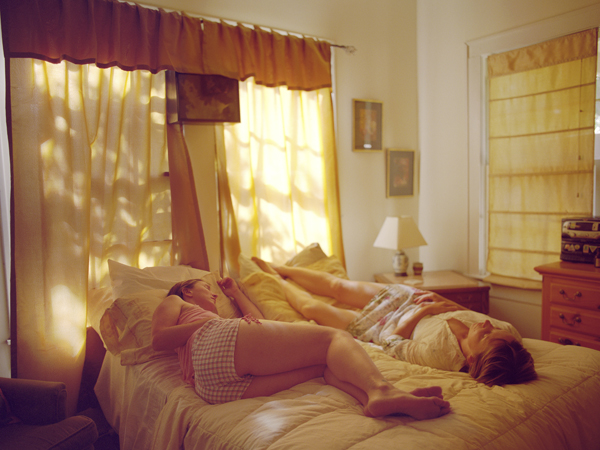 Hello everybody and welcome back to another artist blog post. Today I will be talking about Kelli Connell, a photographer who specializes in “self-portraits.” Connell, an Oklahoma City native, received a BFA in photography from the University of North Texas (1997) and an MFA in photography from Texas Woman’s University (2003). She now teaches at Columbia College and resides in Chicago. Connell took their first photography class in high school. It was at this time that Connell viewed and admired work by Larry Sultan, Francesca Woodman, and Roni Horn. These photographers greatly inspired Connell’s work at this time. A later influence on Connell’s work is Cindy Sherman. Connell states that she was inspired by Sherman’s cinematic feel and Sherman’s true self-portrait style. This is a notable difference between Sherman and Connell’s work as Connell uses a model, Kiba Jacobson, to play the multiple sides of Connell. In a sense, Connell’s work can be considered “self-portrait” as Jacobson is almost “performing” or standing in as Kelli Connell.

Connell’s major work is her “Double Life” series that has spanned 15+ years. The series continues to this day as Connell is motivated to represent how the body ages and how this affects our sense of self in relationships. Connell’s process for her “Double Life” series is a very involved, multi-step process. To begin with, Connell ruminates on her personal experiences and previous relationships. These experiences are just one way that Connell gets inspiration for her work. Another way that Connell receives inspiration is by observing people in public and noting their interactions in her sketchbook. Once Connell has enough ideas, she will spend a significant portion of her time selecting costumes and locations for the shoots. Once all the preparation work is complete, Connell and Jacobson will meet up during the summer and spend one to two weeks shooting these “self-portraits.” When shooting Jacobson, Connell will use one or two rolls of film on each of Jacobson’s characters. Often times, Connell serves as a stand-in for Jacobson’s other character so that the eye contact and interaction between the characters is believable. Once the shoot is done, Connell will develop the film and make contact sheets of the images. She then takes the contact sheets, cuts them and works with the sheets to find a seamless fit. After finding the right combination of images, Connell scans the negatives into Photoshop to continue the combination process.

After 15+ years of devotion to her “Double Life” series, Connell has begun to work on another project. This awaited series titled “Pictures for Charis” will recreate photographer Edward Weston’s images of his wife, Charis. For this series, Connell learned to use a 4 x 5 camera as she needed a small camera that could survive her and her wife’s journey across California. This highly anticipated series will hopefully be released as a book and a tandem exhibition to preexisting Edward Weston exhibits. All in all, Kelli Connell is a long-form “self-portrait” photographer whose work is widely acclaimed and has been featured in The Metropolitan Museum of Art, Los Angeles County Museum of Art, and many other influential galleries.

The first image of Connell’s that truly struck me was “Dark Hour” from the “Double Life” series. This image sparked instantaneous sadness, but also profound empathy in me. Moreover, in this image, we can see Jacobson’s ability to portray male and female characters with her “chameleon” face. I believe that this image tells an intimate story about grief or loss. The “woman,” struck with sorrow, is held by the “man” who remains concerned, yet stoic. I think that this image encapsulates how Connell plays with gender roles and how they come to play when we deal with hardship.

Another image of Connell’s I particularly enjoyed was “Golden Hour” (image at top), also from her “Double Life” series. I love “Golden Hour” as the image’s warm tones remind me of a sun-drenched day at home. Looking at this image reminds me of that fresh cut lawn smell and the feeling of the summer’s sun on my skin. It also reminds me of naps in the sun that warm my body and lull me to sleep. In a sense, this photograph is both nostalgic and intimate. The photograph offers a glimpse into a “couple’s” private time that they spend lounging and being with each other. I truly do admire Connell for her ability to make an image seem like a rare, yet everyday capture of a couple’s intimacy.

The last image of Connell’s I was particularly struck by was “Betsy, Lake Ediza” from her upcoming “Pictures for Charis” series. To me, this image imbues power as the mountains stand dominant in the background and Betsy, Connell’s wife, lies on a hefty boulder in the foreground. All the natural elements in this image create a landscape of power that somehow manages to simultaneously be ethereal. I am also fascinated with the way that Betsy was posed. Her body is on display for us as the viewer to see, yet her face is turned from us. This leaves us curious as to what her face is showing. Is it happiness? Is it exhaustion? We as viewers do not know what Betsy is feeling. It is this mystery that draws us into the image and makes us want to look at it more.

Overall, I found Connell’s work to be intriguing, surprisingly emotional, and inspirational. Thank you all for reading, more digital art is coming soon!

Maloney, Meghan. “Kelli Connell and the Intimate Other.” In the In-Between, 8 Mar. 2013, https://www.inthein-between.com/kelli-connell/.