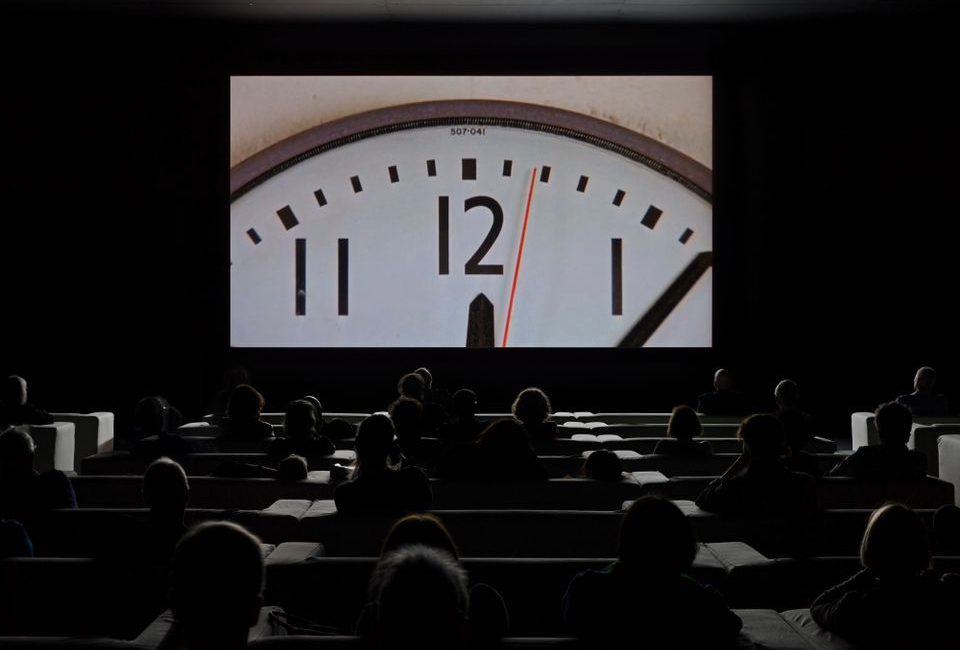 Hello everyone! This week I am going to be talking about Swiss-American artist, Christian Marclay. Born in 1955, Marclay makes sound physical through performances, collages, sculptures, installations, photographs, and videos. His career, which has spanned over 35 years, began with exploring playing turntables as a musical instrument in 1979 as a student. Marclay’s education includes studying at the Ecole Supérieure d’Art Visuel (1977–1980), the Massachusetts College of Art in Boston (1977–1980), and the Cooper Union in New York (1978).

Marclay’s revolutionary work as the first non-rap DJ to use the turntable as a way to rip songs apart, has spring boarded his career as a dadaist DJ and filmmaker. Marclay has been influenced by the chance-determined processes of avant-garde artist and composer John Cage. In fact, Marclay often incorporates Cageian procedures into his work. Specifically, Marclay creates a framework that uses any external event or act as part of the artwork. This London and New York-based artist has had numerous exhibits, including exhibitions at the Whitney Museum of American Art New York, the Venice Biennale, and the Centre Pompidou Paris.

The first work of Marclay’s I watched was his work, “Telephones.” This 1995 video artwork showcases Marclay’s seven minute montage of movie clips that feature characters using telephones. At first, I was bored by how overly simplistic this piece was. I initially thought, “It isn’t really that hard to edit a bunch of telephone clips together!” Well, after looking at it a couple of times I saw that Marclay really does smoothly edit together a lot of diverse clips. He is able to use some story elements and similar motion cuts to create a narrative. This piece also gives me a sense of dissociation as the repetitive motions of the clips made me realize how much we as humans are creatures of habit.

Marclay’s 2002 work, “Video Quartet,” was the second work of his that I encountered. I was able to find two excerpts of his 14 minute piece that I think are good representations of this impressive work. I have to say that Marclay’s hyper cuts are truly impressive as the large amount of work done is obvious. Also, I found Marclay’s use of four screens interesting as it strays from the normal one screen his audience would be used to. By doing the unexpected, Marclay puts his audience on edge as they watch quick snippets of disjointed musical works.

The last work of Marclay’s I really liked was his 2010 work, “The Clock.” I found this work fascinating as it looked at as a more abstract concept. Marclay compiled a crazy amount of film clips into a 24-hour, single-channel video. Just that alone impresses me. What really blows my mind is that the clocks in the work are what the actual local time is. I cannot imagine how weird, uncomfortable, and riveting it must be to sit and look at his work that constantly reminds you of the time. I find this very compelling because Marclay plays with the form of entertainment. When we usually go to a movie theatre, we are expecting to tune out and focus on a film. We put aside our world and dive into theirs. However, “The Clock” makes the work’s world reflect your world by sharing the same time. Crazy neat! Furthermore, I think the audio and video editing on this work was impeccable. Once again, Marclay is able to create a cohesive story using short snippets and J-curve cuts. “The Clock” really interests me because it makes me reflect on time and how we depict it in our work.

All in all, I really like Marclay’s crazy weird and really neat audio and video compilations and edits!

Published: March 26, 2019 Category: Artist Posts Tags: Christian Marclay
Previous: Stop and Go
Next: Gif it All You Got