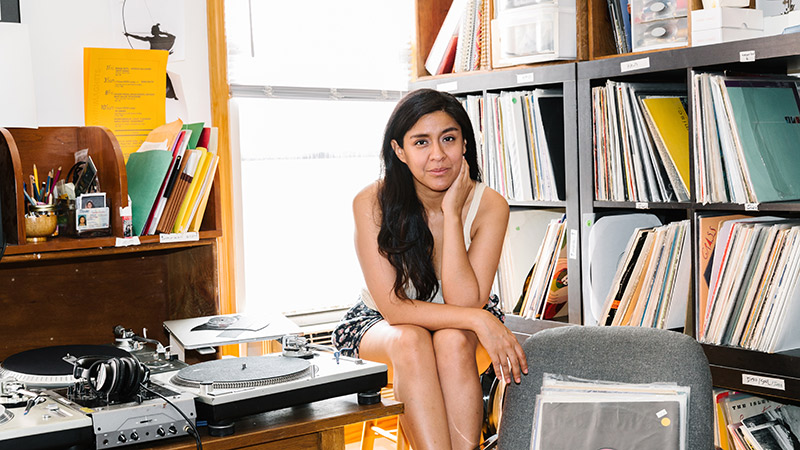 Maria Chávez is a Peruvian born abstract turntablist, sound artist and DJ. Chávez’s education includes an Associates Degree in Audio Engineering from Houston Community College (2003) and a Visiting Research Fellow in Sound Practice Research (SPR) at Goldsmith’s University of London (2014-2017). Maria Chávez works internationally and has been an artist in residence with the CEC Artslink in St. Petersburg, Russia and a fellow at the Robert Rauschenberg Foundation in Captiva, Florida. Also based in Brooklyn, New York, Chávez has been able to work with a diverse range of musicians and DJs from Simian Mobile Disco to Beatrice Dillon.

Maria has received a variety of honors including being on the cover of the widely distributed Electronic and Experimental textbook. In 2012, Chávez wrote her own book titled “OF TECHNIQUE: Chance Procedures on Turntable.” Her work has been showcased at the Civitella Ranieri Foundation, Museo Centre del Carmen-Valencia, and the Cervantes Institute. Furthermore, her DJ sets can be heard at openings for art museums, gala events, and festivals. In general, Chávez’s work is inspired by accidents, coincidences, and failures. These themes run through all of her sound sculptures, installations, and solo turntable performance pieces.

The first work of Chávez’s that I was immediately struck by was her 2016 “Wind Instruments,” which was showcased at the Block in Marfa, Texas. The work, which was for the JUDD Foundation and Ballroom Marfa as part of Marfa Myths, featured a series of sound sculptural works. These sculptures are considered the first pieces in the history of the JUDD Foundation to be presented within the walls of Donald Judd’s private home in Marfa. I really like this work because Chávez embraced the challenge of the wind, a regular issue the Judd Foundation faces, to create a truly unique site-specific live sound and sculpture installation. Furthermore, I was really drawn to the way Chávez used the wind to “play” her metal minimal shaped sculptures instruments. I found this work to have a really interesting idea and a good visualization of fascinating sound concepts.

Another work of Chávez’s that I liked was her 2015 work, “Lapse: Leave: Linger.” This work that was showcased in the Cary Hall at the DiMenna Center in NYC was made up of 56 speakers. I found the way that Chavez had to work with the isolation of the individual rooms intriguing as the DiMenna building is situated in a complex series of entrance and exit ramps for the Lincoln Tunnel. Interestingly, Chávez made the rooms self-contained boxes made up of wooden slats with gaps to let sound reflect off or absorbed by interesting surfaces. This work was impressive to me based off of its scale and attention to how sound influences our understanding and experience of space.

Finding recordings of Chávez’s work is very difficult, so for the last piece I wanted to find a work of hers that I could listen to. Thus, the last work of Chávez’s that I want to discuss is her 2014 piece “The Rain of Applause- INKONST.” “The Rain of Applause” is a multi-channel sound installation based in Malmö, Sweden that used recorded applause from live events. This work, which runs 24 hours, removes applause from performance/presentation and assigns it a new context. By taking the noise out of its original context, opportunities for auditory illusions arise. To some interactors, the sound of applause fades into the sound of a rainstorm. A particularly interesting aspect of this work is that it runs 24 hours. This sparks questions regarding the ephemeral and permanency of artwork, especially when one cannot experience it to its fullest. I liked this work because Chávez played with a sound we all recognize and reassigned it a new meaning and context.

All in all, I really like Maria Chávez’s work and her interesting take on sound and soundscapes.

Can You Hear Me Now?

Published: April 2, 2019 Category: Artist Posts Tags: Maria Chávez
Previous: Gif it All You Got
Next: Interact With Me!